“There is no such whetstone, to sharpen a good wit and encourage a will to learning, as is praise.” The Schoolmaster

St John’s Preparatory School was founded in 1956 by Peter and Barbara Hickman at their Borrowdale property. It began as a small family school with 13 pupils. It was their desire to establish a school for boys which offered a sound system of education in an atmosphere conducive to the growth and development of each personality. The school soon grew into a viable private school with 120 boys with a class in each grade from 1 to 7.

The Succession of the Heads

Brian Igoe, a parent and Governor of St John’s Prep School, first raised the idea of another private secondary school in the mid-70s. However it could not be pursued due to constraints arising from the prevailing struggle for independence. In 1981 Scot Honey and David Ellman-Brown revived the proposal. There was an overwhelming positive response and by February 1982 the first informal discussions took place with the Ministry of Education. 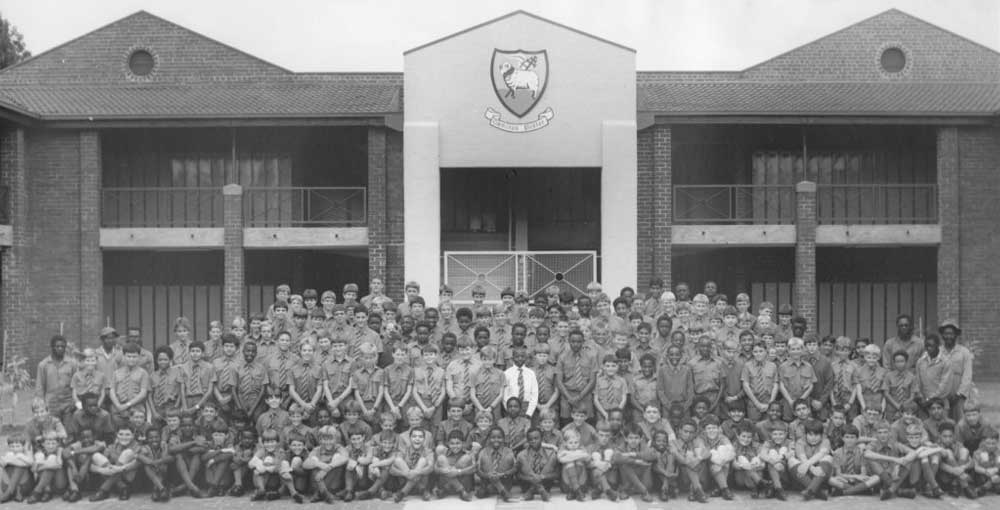 Scot Honey was appointed Chairman of a sub committee charged with overseeing the development of the proposed college. Colin Broadbent, Anthony de la Rue, Stuart Perry and David Zamchiya came on board and set about finding a suitable site. The ‘maize patch’ was obviously preferable but it had been zoned as a Government primary school. However, permission was granted for its re-zoning and with a generous donation by a local firm of the land across the road, there was ample space to build our College.

By January 1983 a formal application to establish the College was made to the Ministry of Education. David Zamchiya played a crucial role in sensitive discussions, affirming the Government’s policy of racial quality and social justice.

On 1 February 1985 David Vincent, Chairman of the Board of Governors received the go-ahead. “The Ministry of Education has agreed that you can proceed to establish St John’s College with a view to its opening in January 1986”.

The architect’s sketch of the new College depicted a trim double storey building with facilities for classes up to Form 1V level. Intake would be limited to Form 1 and 11 students, with a new form being added each year until ‘A’ Level classes in 1990.

The opening of a new college was announced in the local press along with the date for entrance exams. At the instigation of Ted Sharples primary feeder schools were approached asking them to recommend students and he wrote to each and every one of them.

In August Construction Associates was awarded the tender and it took them only 22 weeks to build the College. The efficiency of the architects and the hands-on approach by all concerned proved to be a strategy worthy of a case study in management school textbooks! A borehole and irrigation system was set up by Prep School parents Roger Searle and Roger Thompson. These systems enabled landscaper Toni Honey to transform an erstwhile maize patch into a ‘tropical garden’.

Tony Knight and his fund raising committee raised $750 000 in one year – and this was all from contributions by local firms.

In July 1985 prospective students for the non existent St John’s College sat their entrance exams at St John’s Prep School. They had to pass by the site of their future college – an old maize patch.

By October a staff of highly qualified staff and experience had been recruited.

22nd January 1986 – red bricks spruced up, desks, chairs and blackboards in place and teachers at hand. And 180 boys – also spruced up in their grey and green and, as one of them put it “to create our own traditions”.